The mandatory check in via the SafeWA app or manual registrations continues for Over 16s at UWA and HBF.

Please ensure you stay at home when unwell.

The club is pleased to announce the appointment of Andrei Kovalenko to the position of Head Coach of the men’s program. Many of you may already know “Kova” as he has been involved with the club for a number of years and was the architect behind much of the success that the club has enjoyed over the last decade. As a player Kova competed at the highest level for nearly 20 years and took part in three consecutive Olympics for three countries, including a bronze medal in 1992.

Kova had a distinguished career playing in the Australian Water Polo League over a number years. Kova scored 105 goals in one season along with the record for the quickest goal .06 second and for scoring 2 goals within 1 second and snatching a vital victory for his team in the dying seconds of the game.

After retiring from playing Kova shifted focus to his passion for coaching and passing on his years of experience to the next generation of water polo players.

Kova will implement the club’s coaching plan and oversee all of our men’s/boys’ coaching activities from AWL all the way through the junior programs.

We are very lucky to have a coach of Kova’s passion and calibre involved in our program and we are excited to welcome him back to the club.

The club is pleased to announce the appointment of Damian Kelly to the position of Head Coach of the women’s program. Many of you already know “Damo” as he has been involved with the club for a number of years and was the development coach of junior men’s teams that led to the success that the club has enjoyed over the last decade.

Damian is currently the Head Coach of our men’s program and was proposing to leave for Sydney on a permanent basis in December but a change of heart has led him to reconsider and take on the Women’s Head Coaching position. Damian is very keen on implementing the successful men’s program into the women’s program.

He will be responsible for all of our women’s /girls’ coaching activities from AWL all the way through to the junior programs.

The club is very fortunate to have a coach of Damian’s experience and passion for the sport. We expect with Damian’s direct involvement in the women’s program that we will see significant changes in our playing results at both state and national competitions.

Members are most welcome to contact Damian and congratulate him on his decision to coach the women’s program of our club.

Any person aged 16 and over who enters HBF Stadium or UWA Aquatic Centre will be required to register their contact details. This includes members, spectators, volunteers, coaches and contractors.

HBF Stadium will be trialing contact tracing from Wednesday 2 December with full operation by Saturday 5 December.

To help, the WA Government has developed a free app, SafeWA, which will provide businesses with a digital contact register system.

To avoid delays the Club strongly encourages you to download the app before you arrive at either venue and for express entry, scan the QR code on your way into the venue.

SafeWA can be downloaded from the Apple App Store or Google Play.

Please follow the directions and signage at each entrance point at each venue.

Please allow extra time for the contact tracing check as you enter the venue, particularly at HBF Stadium.

For those people who do not have access to a smart phone or the app, a manual sign in process will be available at entrance points at each venue.

Further information on SafeWA contact tracing can be found here

Kudos to the following seniors on their senior game milestones!

Michael Hopkins – 800 senior games.
Founding member and games played record holder. Hop is a goal keeper who played in the longest (5 hours) final in water polo history. 4 quarters followed by 20 periods of extra time. The rules have since been changed!

Mark Mason – 500 senior games.
Originally from Victoria, and a team mate of Hop, Mase has also coached our A Grade women in the late 90s and Juniors at our Club more recently.

Jason Shaw – 300 senior games.
Jase started playing polo in 1983. He was Captain of our Quarter Century team and UWA Sport Star of the Year in 1993!

Alexandra Hughes – 100 senior games.
Alex started as a Junior and has played for the UWA Torpedoes. Of our current senior women only Margy O’Connor, Lisa Lilleyman and Kelle Mason have played more games than Alex and they are twice her age!

Congrats to these members and our other milestone players below!

Without a doubt season 19/20 will go down in history as one we will never forget.

Prior to the unprecedented cancellation of the season due to COVID-19, the Club was having a sensational season with plenty of positive banter around the Clubrooms every Wednesday night.

While we will never know the results of the finals, a special shout out goes to the Men’s UWA City Beach Challenge Cup Team and the Men’s B Grade Rangers team who topped the minor premiership tables.  All the State League results can be found here.

Below is a table of who took out the F&B for their team as voted by the referees.
(The Club did not award Challenge Cup prizes due to the short season). 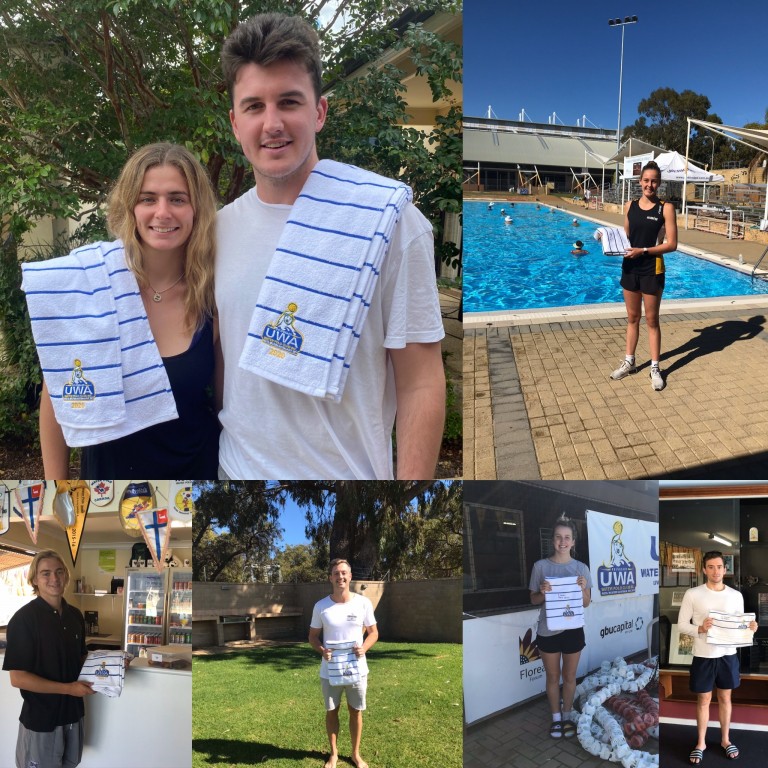 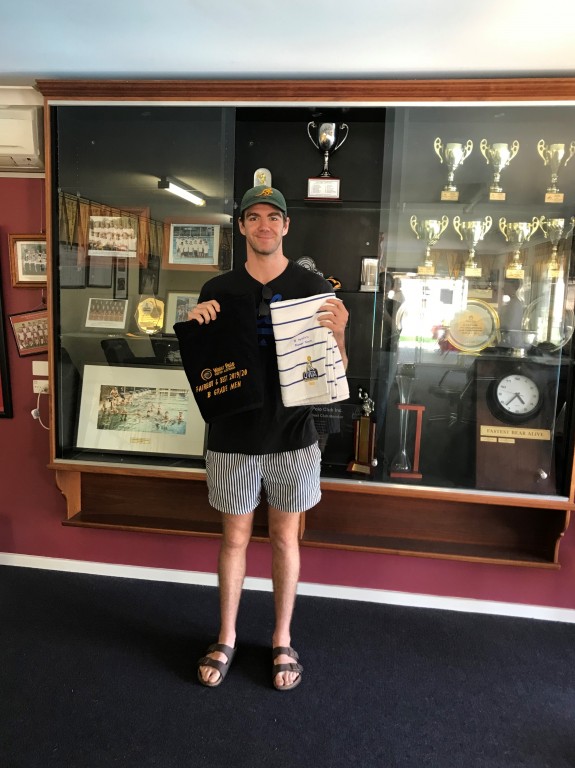 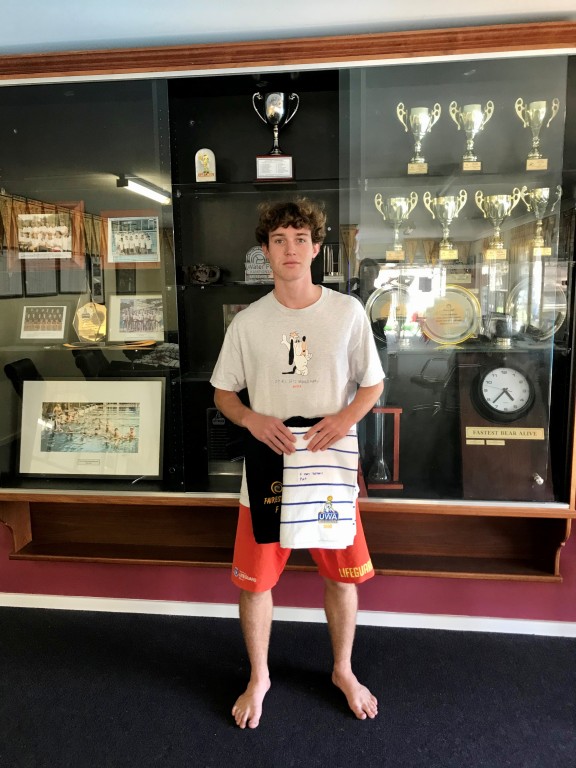 Team of the Year

Congrats to the E Grade Horses, captained by Josh Everett, for taking out the O’Keefe Trophy for Greatest Team Contribution in their first year with the Club.  It’s great to see the younger crew getting stuck into the Senior State League competition with such energy.  Josh has done a super job herding the ‘Horses’ and we are all looking forward to seeing these guys grow as a team as the seasons pass.  Sterling effort boys … giddy-up now! 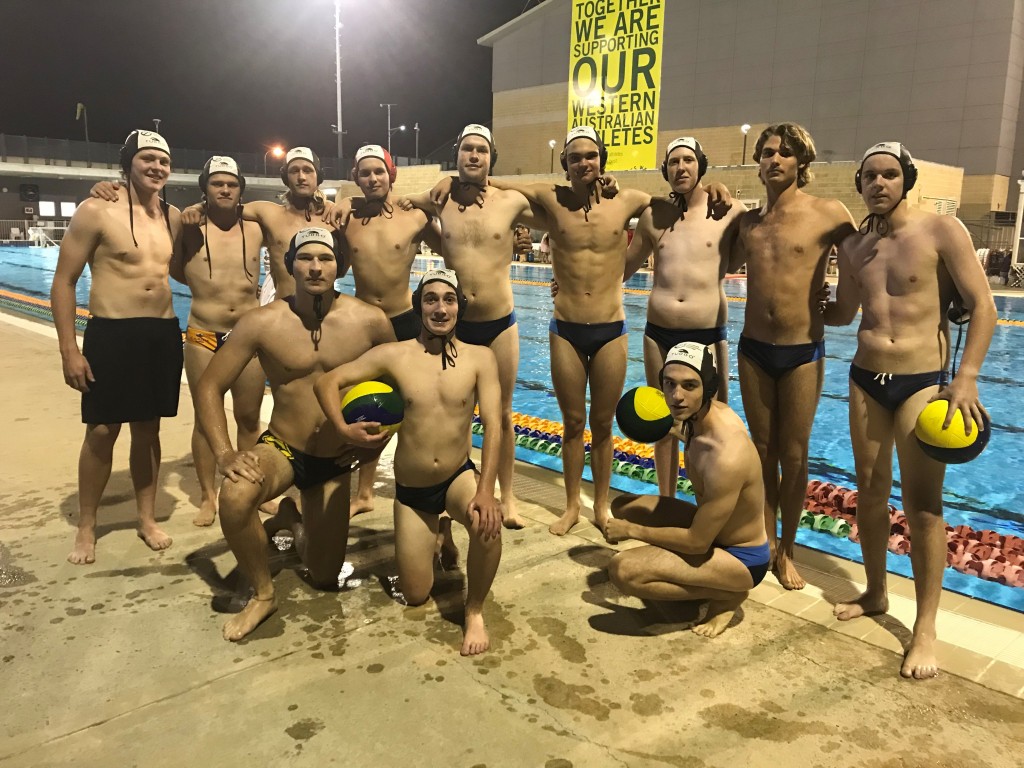 Rob Gray from the E Grade Growlers took out the ‘Dunny Seat Award’ with a swift, champion-like effort … breaking his own team mate’s (Andy Meyer) nose at training with his knee (accidentally of course).  Rob was heard muttering “head under water is fair game”.  Other nominees included Josh Everett and John Contessi.  When you see them next, ask them about why they were nominated!

Polo Bear of the Year

The Senior Award goes to a person who has worked tirelessly to help out our Club.

Congratulations to Club Secretary Clare Barber on being awarded the ‘Best Contribution by a Club Member – Polo Bear of the Year Award’ – for her exceptional contribution to the Club.  Clare also won the Award last season in her first year as Club Secretary.  Clare dedicates an enormous amount of time to the Club beyond the normal club secretarial role.

Clare demonstrated her interest in youth development guiding a group of thirteen U16 members through the Community referee accreditation course keeping them all on track and assisting in navigating the various courses, pre-requisites and liaising with WPA to undertake the practical components.  This was the first group of Community Referees to gain the accreditation in WA.

Clare assisted in the Café by familiarising our new Club Manager with club operations and establishing rosters.

Behind the scenes this season she arranged City of Nedlands Public Building Approval for our Clubrooms, food business registration and is working towards making an application for a Club Restricted Liquor licence.

She co-ordinated the helpers for UWA Open Day and acts the club’s liaison with UWA Sport.

As if that was not enough she was often spotted assisting F Grade Men’s Caramello Bears with table duties and even constructed rebound nets following their purchase.  And when no one else was around she’s the one that cleaned out the exploded cans of cool drink from the Clubroom fridge!

Thank you Clare and congratulations!

Special mention to Sonya Orso our new Club Manager, for her excellent service on Wednesday nights.

Thanks to all our Team Managers and Club Referees along with Women’s Delegate Lisa Lilleyman and our new Men’s Delegate Dex De Bruin and everyone else on the UWA WPC Committee for their ongoing dedication to the Club.

Perhaps more than ever before, the Club is looking forward to getting everyone back in the pool!